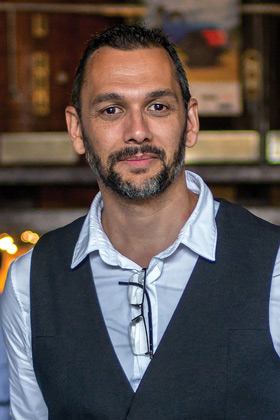 '' The discovery of Canson® Infinity papers was a real eye-opener. I finally found the paper that adds this extra soul and essential vibration to my artwork.

I like the intense blacks and the depth of the details of the Etching Rag Edition. Its velvety appearance sometimes suggests that it is a painting rather than a photograph. It's disturbing and magical at the same time !

My lighting technique requires a lot of attention and precision and I have the chance to work in close collaboration with Bertrand Lorion, a Canson® Infinity Master Craftsman, who knows how to handle this exceptional paper and produce breathtaking prints.

A timeless and artistic journey in Axel Ruhomaully's Cité Mécanique
Axel Ruhomaully is a multi-faceted Belgian-Mauritian artist based in Mauritius. Born in Brussels, he began his career in 1996 as a crew member on long-haul flights of an airline. The virus of travel and curiosity will not leave him and after going through a photo school in Paris from which he graduated in 2000, Axel swaps his uniform for a camera, his new passport to quench his thirst for discovery. Over time, his art photographs take us on journeys that remind us of the great moments in history thanks to unique photos taken in exceptional places.

Thus, like a modern-day storyteller driven by his objective of collecting the memory of our heritage in his viewfinder, Axel gives us a testimony and a rare glimpse of collection items mainly exhibited in prestigious museums around the world. As if to reveal the secrets of his stories to us, he sculpts these legendary objects with his technique of 'stencils of light' like his recent photos taken at the Air and Space Museum in Le Bourget (France), at the Leonardo Da Vinci Museum (Italy) or this famous spaceship 'Vostok 5' photographed in the Cosmos Tsiolkovsky Museum (Russia) aboard which cosmonaut Valery Bykovsky traveled in space in 1963.

So many photos which, printed on Canson Infinity Edition Etching Rag, invite us to a real journey in space and in time. All his artwork are all the more special as the artist obtains, for each photograph, the exceptional authorizations which allow him to access these treasures often kept in the reserves of mythical institutions.

Some shots may require up to 8 hours of work. His artistic intention borrows its light from the cinema including a deep black that he creates, without retouching, for each shot. Axel draws its light signature inspiration from the Chiaroscuro technique dear to Rembrandt in order to awaken colors and reveal matter.