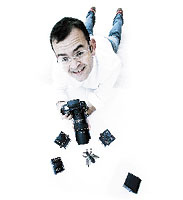 In my work, paper plays a predominant role - I have been drawing since the age of three and it is still part of my work today - a white sheet of paper is for me the basis for any kind of creative thinking.
I have always thought in terms of photos. As paper is the natural media for photography, it seemed obvious to me to put it forward in my work.
This omnipresent whiteness in my work is obtained right from the beginning by simply using a sheet of paper behind or beneath all my subjects. This whiteness needs to have its own life, its own story and an extraodinary quality but also be able to make you doubt about whether you looking at a painting or reality, fiction or real photography.After many unsuccessful trials, I discovered Aquarelle Rag paper and it is obvious for me that it is the ideal paper to support my process.

Stéphane Hette studied illustration and discovered photography by chance when he was 37. After a year of trial and error, he developed his own process to photography living subjects: he respects the environment and integrity of his subjects and uses only his patience and his knowledge of the species to take his photos.
Since 2006, he worked on two paralell projects: "Colocataires" and "Les ailes du Désir". In 2007, several of his photos received many national and international awards. He was also invited as a "guest star" at the International Wild Life and Nature Photo Festival in Montier-en-Der (France). In January 2008, he joined the famous agency BIOS. In May 2008, the series "Les colocataires" and "Les ailes du désir" received 3 awards (including the public's choice vote) and 5 titles at the prestigious international contest PX3 2008 PRIX DE LA PHOTOGRAPHIE DE PARIS.
His photos are published in several magazines such as Terre Sauvage, Chasseur d'Images, Photofan, Voyageur pour un esprit d'ailleurs, Phot'Art International, Mankind and Nature (China), La Revue Française de photographie, the Bayard Press Group, Image & Nature... Member of the OPIE* (France) and sponsor of the Lepidoptera Breeders Association (UK), Stéphane Hette protects and participates into the protection of the environnement and insects. He exhibits very often in France and abroad (Switzerland, Belgium, Germany, Japan...)

All images are copyright© Stéphane Hette