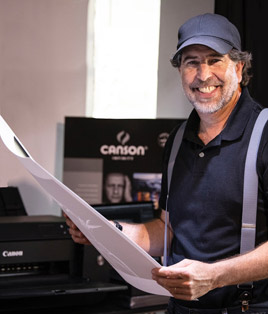 "For me photography is all about the paper. After 40 years plus of dark room printing based on film photography, I feel Canson Infinity papers give me the highest performance level with the greyscale and absolute blacks that I've been trying to get for years in digital photography printing .

I can hang a film or digital photo in the same exhibition today and there's no difference in image quality or meeting the conservation demands of the Fine Art photography market."


Diego Ortiz Mugica is a renowned Argentine photographer, and a worldwide reference in Zone System and Fine Art Printing techniques. For fifteen years, Ortiz Mugica worked as a photographer for the Antorchas Foundation and the National Museum of Fine Arts in Buenos Aires and he also had his own advertising photo studio, where he worked for the market’s leading brands. Besides, he was a tester for Nikon and Kodak. He was selected by Manfrotto, a company headquartered in Italy, as one of the Local Heroes of Latin America.

His photos are part of remarkable international collections as well. Several of his works belong to the prestigious Smith Collection, shown at the exhibition entitled “Great Masters of the 20th century”, together with works by Ansel Adams, Edward Weston, Robert Doisneau, and a dozen of other great masters. Ortiz Mugica’s works travel around the world and have been on display more than ten times in cities such as New York, Washington, Palma de Mallorca and Frankfurt.

Ortiz Mugica was given the “Lorenzo il Magnifico” Award at La Biennale Internazional d’Arte Contemporanea of Florence. In 2007, his book “Fly Fishing Moments”  was selected by the Argentine Chamber of Publications as the “best book printed and edited in Argentina”. A short time later, he published Parques Nacionales Argentinos, the official book of Argentina’s National Parks Agency. In 2014, he published his third book, Celebration, portraying brother David Staindl- Rast on his visit to Patagonia.

Currently, Diego Ortiz Mugica is strongly focused on his personal photography and splits his time between Bariloche, where he organizes photo travels in Patagonia and teaches workshops at his studio and dark room, and Buenos Aires where he has a studio and a school of photography.